Jason Dugré is an actor-writer who hails from Boston, and currently lives in Los Angeles. In addition to St. Bernard, Jason starred in Gabe Bartalos’ film Skinned Deep. He recently traveled to the Toronto International Film Festival for critically acclaimed screenings of another film he stars in called Fat. He is a founding member of comedy troupes, TROOP! and The Riot Act, the latter of which created the web series “Welcome to Jeff Country.” You can also catch him on season 2 of “The Hard Times Of RJ Berger” and numerous TV commercials. As a writer, he continues to write horror and comedy screenplays. He also has always secretly wished that the world looked like TRON. 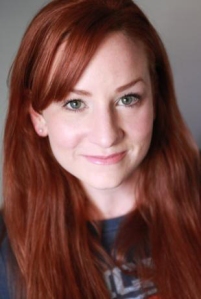 Katy Sullivan is an actress and athlete that lives in Los Angeles.  She received a BFA in acting from Webster University’s Conservatory.  She has worked in many theatres in Chicago, and most recently appeared in The Long Red Road at the Goodman Theatre directed by Philip Seymour Hoffman. She has appeared in numerous television shows and independent films including Walk On. She is probably best known for her character on NBC’s My Name is Earl and was most recently seen on ABC’s Last Man Standing with Tim Allen. Katy is a three time US Champion in the 100m, the fastest woman in the Western Hemisphere. She was among the first bilateral above the knee amputees to compete in the Paralympics in ambulatory track when she ran in the 100m at the London 2012 Paralympic Games, setting a new American record of 17.33s and finished 6th in the World.

A New York actor and graphic artist, Peter Iasillo, Jr. has appeared in Spookies, Street Trash, Skinned Deep, USA Up All Night with Gilbert Gottfried and numerous stage productions throughout New York and Westchester County. Pete was also an “Elevator Zombie” in George Romero’s Day of the Dead along with Gabe Bartalos. Pete is considered NY City’s go-to “homeless man” and has been featured on 30 Rock, Hostages, Person of Interest, Unforgettable, AdultSwim.com, CollegeHumor.com and many more films and TV shows. Saint Bernard marks Peter’s seventh collaboration with Gabe Bartalos.

When English actor Warwick Davis was 11 years old, his grandmother heard a radio appeal for people under four feet tall to appear in Star Wars: Episode VI – Return of the Jedi. A huge Star Wars fan, Davis auditioned and was cast as an extra, playing an Ewok. Davis’ next big role came with a part specifically written for him, as the titular hero in Willow. Other successes followed with roles in such projects as Prince Caspian and the Voyage of the Dawn Treader and two distinctly different film series – the Harry Potter and Leprechaun film series. While filming Leprechaun, Warwick met make-up artist Gabe Bartalos which lead to his role in Skinned Deep as “Plates”, and his appearance in Saint Bernard as “Othello”. Currently, Davis stars in the comic mockumentary Life’s Too Short written by Ricky Gervais and Stephen Merchant.

George Clayton Johnson is an American science fiction writer most famous for co-writing the novel Logan’s Run with William F. Nolan (basis for the 1976 film). He is also known for his work in television, writing screenplays for such noted series as The Twilight Zone, such as “Nothing in the Dark”, “Kick the Can”, “A Game of Pool” and “A Penny for Your Thoughts”, and Star Trek, the first aired episode of the series, “The Man Trap”. He also wrote the story on which the 1960 and 2001 films Ocean’s Eleven were based. He makes an appearance in Saint Bernard as “Father Time”.